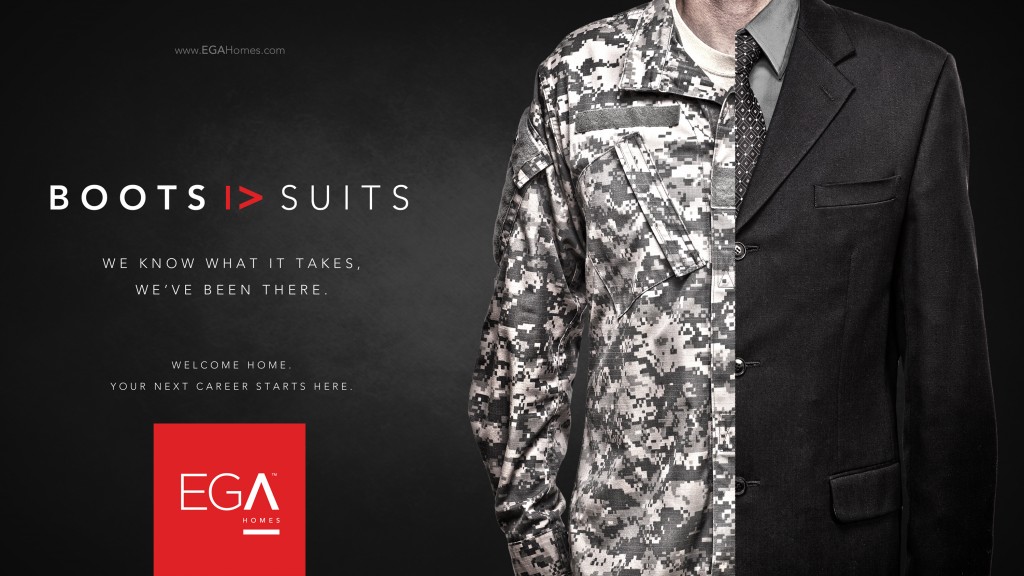 EGA Homes is proud to be a Veteran-owned and operated agency with a passion for giving back, not only to our nation’s Veterans, but to the communities in which we live and work. EGA Homes strives to provide new purpose to U.S. Veterans through our Boots to Suits (TM) program: We understand the challenges Veterans face in transitioning from military life to civilian life. EGA provides opportunities, training, education and resources for motivated Veterans to apply their leadership, discipline and decision-making skills to a purpose-filled life as a real estate professional. Our team of professional and passionate Agents pride themselves on providing exceptional customer service and unparalleled value to our clients. We take a “team approach” by collaborating the individual contributions of all members of the team to achieve success for all. EGA Homes stands for the highest integrity, work ethic and commitment to excellence.

Veterans of the U.S. Armed Forces and Military spouses are encouraged to apply for the Boots to Suits employment program whereby EGA Homes  helps to license, hires, and trains our nation’s heroes and provides the template necessary for a successful career in real estate.

If you are a Veteran and are considering real estate as your next mission, contact us today. We will sit down with you at NO cost and lay out in detail how we can help you! 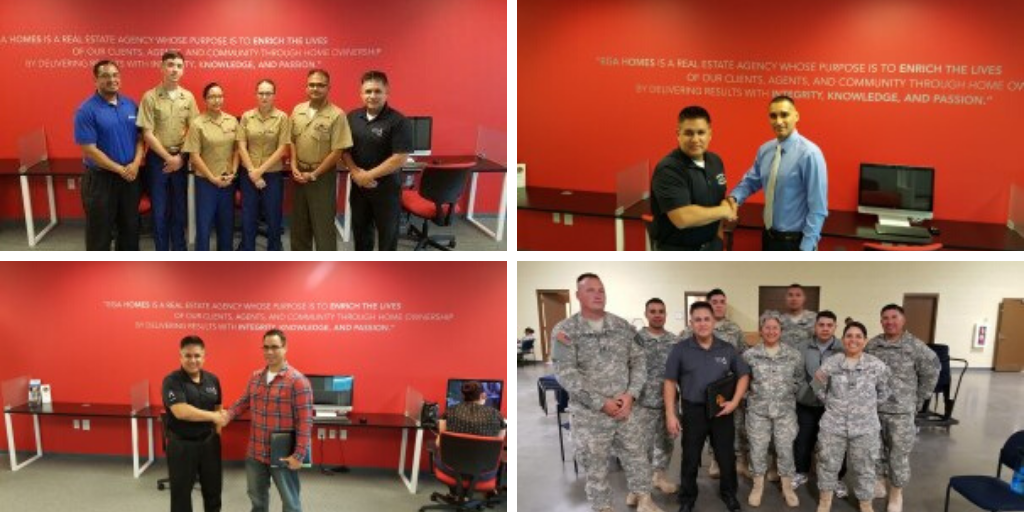 His fear of complacency surpasses his fear of sharks.

He’s no adrenaline junkie, though.  For the entrepreneur, it’s more about leaving his comfort zone – ensuring that, at the end of his days, he won’t look back and wince.

“I think that’s my biggest fear,” he says.  “Complacency. Regret that comes from not taking action.”

Hernandez, deep in his core, has a drive to push limits – a drive shaped by family, youth sports, the Marine Corps, UC Riverside, and the A. Gary Anderson Graduate School of Management (AGSM).

Thanks to that mix, Hernandez built a residential brokerage with a twist: assisting veterans.  EGA Homes, based in Riverside, serves a large swath of Southern California and employs many fellow veterans hired through Boots to Suits, a program Hernandez founded in 2009 to help veterans become real estate professionals.

“Creating a real estate company focused on assisting fellow veterans has helped me connect the dots and carry out the Marine Corps motto, ‘Semper Fidelis,’ which stands for ‘always faithful,’ ” he says.

The dots start in Rubidoux, Calif., where Hernandez attended Jurupa Valley schools.  His parents, who divorced when he was two, instilled in him a fierce work ethic; Mom was a teacher, and dad, retired from the military, was in law enforcement.  When Mom enrolled him in sports, he loved the rhythm: Work, learn, help the team win.

“Because my family and coaches embraced a ‘no excuses’ mentality, the military was not hard, except for war,” says Hernandez, who enrolled at age 17.

Eight years as a Marine taught him, or reinforced, a range of life skills: problem-solving, leading in the trenches, sacrifice, courage and valor.  After deployments stateside and to Panama, Saudi Arabia, Kuwait, Spain, Belgium and Japan, Hernandez left the service with several medals, ribbons and awards of distinction.

He then attended Riverside City College, UC Riverside and AGSM, receiving a bachelor’s degree in political science (1996) and an MBA (1999).

“I’m back there helping because of the people, because of everything the school has done for me,” Hernandez says.


More broadly, he works to reduce the rate of veteran suicides and joins burial details at Riverside National Cemetery, to ensure that Marines are properly interred.  Hernandez also founded the nonprofit Veterans Housing Alliance, which prepares veterans for homeownership, along with Boots to Suits.

At EGA Homes, about 20 percent of business entails work with veterans: assisting them with VA loans, real-estate education, financial literacy, and, if needed, credit repair.

For agents at EGA Homes, “I took the Marines’ SOP manual and converted it to real estate,” Hernandez says.  Twenty pages cover such topics as bonding with clients; achieving excellence through specialization; and working, learning, and helping the team win.

The regimen, including a 12-week boot camp, is not for the complacent.

Today, Hernandez – a high-school varsity boys basketball assistant coach eyeing a safari and wingsuit flying, though not at the same time – carries a sheet of paper, folded into the shape of a matchbox, creased and tattered and splotched with dried coffee.

The page outlines Hernandez’s creed (h/t John Wooden), his goals, and some rules for implementation.  An excerpt from the 22-point list: “Do you give every ounce of yourself on the court? In life?”

Thank you for the email, we'll get back to you shortly